I've decided to blog about my failure with shrinkies (I will attempt some more variations!) just to help anyone out there who might think they just can't do it right or something.  Failures happen, but you just have to learn from them and try again!  For me, crafting is about having fun while experimenting :). 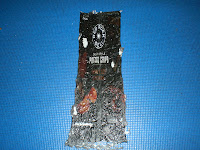 I preheated the oven to 250C and placed the packet on one sheet of baking paper on a tray, with another sheet of baking paper on top and another tray on top of that to hold it flat.   I lef it for 3 minutes, then checked it.  It looked like it was about 20cm long and only 6cm wide.  So the proportions had changed quite a bit, but I wanted it to be smaller than that so I popped it back in.

I left it in there for another 3 minutes, then pulled it out to check on it.  I couldn't see it but it didn't seem to have shrunk any further.  I tried to pull the baking paper off but the chip packet was still all melted, so I decided to leave it to cool while I tried attempt number 2.

What I learned: Only leave them in for about 2 minutes at this temperature, it's way too hot. 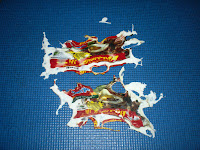 The oven was preheated to 250C.  This time I just placed the mi goreng packets in a piece of baking paper, which I folded around them individually.  I left them in for only 2 minutes, then checked on them.  They were little blobs of melted plastic.

What I learned:  The fact that these are made just out of plastic, with no foil on the inside, means that they 'cook' faster than the chip packets. 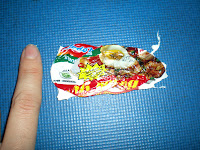 The oven was left to cool to 180C for 10 minutes.   I folded up a mi goreng packet in baking paper again.  I left it in there for 2 minutes. It had only shrunk a little bit so I left it in for another minute.  The end result looks like the edges shrank at a different rate to the middle, so perhaps 180C is too cool.

Conclusion:  Higher temperature for a shorter period of time, mashed between the two trays to keep it flat.

I think that this is all I shall attempt for today.  I only have two more chip packets left from my partner, so will wait until they've pigged out a bit more ;).

If anyone knows of some ways to improve my technique, I'd be much obliged as the online tutorials don't seem to be working for me (but I am narrowing down how to do it I think - a few more trials and I shall have it, I'm sure!).
Written by Kommoner

Email ThisBlogThis!Share to TwitterShare to FacebookShare to Pinterest
Tags: tutorial