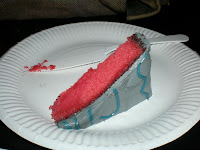 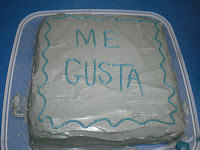 Note: I coloured it red with grey icing.  I just went from an old recipe from somewhere but altered the amounts of things slightly.  If you have any alterations to the recipe add them in the comments and let me know how it goes!
Written by Kommoner No comments:

As you all know, I donate 10% of my sales to a different charity each month.  I've currently been doing research into ones that are veg friendly i.e. do not encourage the exploitation of animals (as much, hence veg* rather than just vegan).

This is because the long term environmental effects of meat eating are terrible (e.g. climate change refugees, pollution) and I don't think that the exploitation and murder of animals for food is justified.  For example, Oxfam promotes giving people animals to use and exploit.  As such, I have researched and come up with some veg* friendly charities from around the world.

Vegetarian Orphanages
Veg*n Food Aid
Food Banks, Soup Kitchens & Restaurants
I have not included animal sanctuaries, animal rights advocates or rescue groups because there are so many in each country that this list would get out of control.

Know of any more?  Leave a comment or shoot me an email at kommonerkraft(at)yahoo.com.au and I will continue to update this page.
Written by Kommoner 1 comment:

Email ThisBlogThis!Share to TwitterShare to FacebookShare to Pinterest
Tags: charity

Method:
1.  Put rice on to cook.
2.  Put diced potato on to cook.
3.  Fry up onion, tofu, mushrooms and garlic until onion starts to go see-through.
4.  Add chickpeas, cauliflower, coconut milk and spices to the onion/tofu mix.
5.  Once potatoes are done, add to chickpea mix.
6.  Serve with the rice.

Serves: 4 to 6
Written by Kommoner No comments:

I've found myself with an abundance of brown rice so I'm currently working my way through my bookmarked recipes (there are a lot).

I found a recipe entitled Carribean Red Beans and Rice and decided to give it a try. 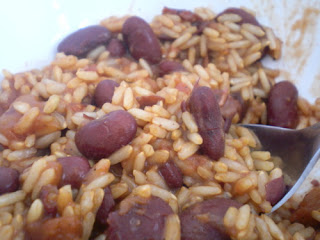 I needed substantially more water; about 1 and 1/3 cup more.  I didn't include the onion either as I had none.  In my opinion, it needed more spice, more 'oomph', but all in all it was a pleasant dish.  I was also really lazy and just put everything in the pot together and it turned out fine.  It's a nice, simple dish that is yummy.

This post is more of an idea starter than a recipe. 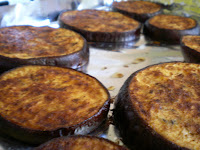 There are many ways that you can prepare the eggplant.  I sliced mine into 1cm thick 'fillets' and then put them on a tea towel.  I sprinkled them with salt to help drain the moisture away (the longer you leave it, the better their texture). 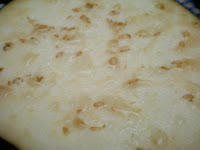 I then mixed together some paprika, vegetable oil and chili powder and covered them with it. 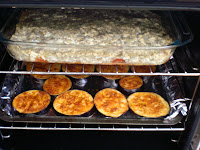 I put them in the oven (with my casserole) for 30-40 minutes at 180C until soft (I poked one with a fork to check).  Remember to flip over and brush with oil on the other side at the 15 minute mark!

You can use them on burgers, by themselves with some veggies, chopped up on a wrap...  They're very versatile!
Written by Kommoner No comments:

We all know what eggs are, right?  The perfect ingredient for omelettes, something that you have to fiddle with to crack open and put in cake mixes.  Something that healthy people have raw.  Something that comes from chickens that roam the countryside, with farmers picking up after them.


Eggs are, in fact, unfertilised (most of the time in commercial production) material that the chicken expels from their vent.  It is a natural part of their life; similar to how female humans experience menstruation monthly.  However, chickens in the egg industry are forced to produce eggs at a higher rate so that the most money can be made.  If their egg production falls, they will endure a forced molt in order to boost production before they are killed off.  The egg-laying hens themselves are not the only victims of the egg industry.  Twelve million male chicks are killed each year as a by-product of the egg industry.


The egg industry made $340 million dollars in 2005-06 thanks to the exploitation of 13 million chickens forced to sit there each day giving you an egg.  Chickens are intelligent creatures capable of communicating with one another, learning tricks and problem solving.  In the egg industry, they are confined to cages with 550 square centimetres per bird.  If you have a ruler near you, it's equivalent to 22cm x 25cm worth of room.  Not only this but the birds are debeaked and can suffer multiple injuries due to not being able to walk around, stretch their wings or socialise normally.


But surely it's different on free-range farms, right?  Wrong.  They still don't need the male chicks, they still need to breed the egg layers, they still need to kill off the egg layers once they've reached the end of their useful lifespan.  Not only this but they are, obviously, still motivated by profit, which requires using the least resources possible to get the same amount of eggs.  As such, 'free-range' does not really mean what most people are led to believe and there is no legally enforceable standard in Australia currently.  In 2011, the Australian Egg Corporation started taking steps to make a legally enforceable definition of free range which would allow 20,000 chickens per hectare, which Animals Australia campaigned against.  This is not even 10x more space than current regulations for 'normal' egg production (they would have 1m x 50cm in which to roam).


If left on their own, chickens will naturally eat their own eggs in order to take the nutrients back into their body.  It takes a lot of energy and the shell uses up a lot of calcium that would be better off put back into their bodies for the next round.  If you have a chicken, break the egg open for them to eat or consider grinding up the chicken shell to feed back to them for calcium.

Want to know more about going egg free?  Check out WhyVeg or VegWeb for recipes for tofu scramble, cookies, cakes and muffins.

Want to rescue a chicken?  The Battery Hen Adoption Project seeks to find people to adopt hens that would otherwise be killed by the egg industry.
Written by Kommoner No comments:

The charity that I have chosen for the month of January 2012 is Rainforest Rescue.  I chose them due to their diligent work in reforestation and protecting the environment.  Without the environment being protected, there would be nowhere for animals to live nor any clean air for us to breathe.


"Rainforest Rescue is a not-for-profit organisation that has been protecting and restoring rainforests in Australia and internationally since 1998 by providing opportunities for individuals and businesses to Protect Rainforests Forever.  Our projects re-establish rainforests through planting, maintenance and restoration programs, as well as purchasing and protecting high conservation value rainforest and preserving its biodiversity."